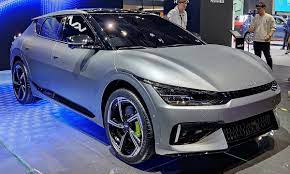 Kia EV6 can do up to 528 kilometers per charge

Kia presented its new EV6 electric car in March, and orders for the crossover have been accepted in Europe since June. For the longest-range version, more than 510 kilometers per battery charge were initially promised. A more precise value is now available.

The EV6 is the first battery-powered model from the South Korean brand. Kia announced that the versions with 77.4 kWh battery and rear-wheel drive could cover up to 528 kilometers in accordance with the WLTP standard. That is the result of the now completed homologation for the European market. The all-wheel-drive version also cracks the 500-kilometer mark and can travel up to 506 kilometers. The combined power consumption of the two models is given as 16.5 kWh / 100 km and 17.2 kWh / 100 km.

The almost 4.70 meters long EV 6 is available in three versions: as a basic model, as “GT-line” and as “GT”. A 58 kWh battery, which is combined with a 125 kW motor (170 hp), is also available for the base model with rear-wheel drive. With the larger battery pack, the rear-wheel-drive vehicle mobilizes 168 kW (229 hp) and the all-wheel-drive vehicle 239 kW (325 hp). Both drive variants are offered for the basic model as well as for the EV6 GT-line. The standard all-wheel-drive top model EV6 GT is equipped with a 77.4 kWh battery and has an output of 430 kW (585 hp). Deliveries of the EV6 base model and the EV6 GT-line will start in autumn, according to Kia, with the GT version to follow in winter 2022.

The EV6 is the first Kia model on the new electric car platform E-GMP (Electric-Global Modular Platform) of the Hyundai Motor Group, to which Kia belongs. In addition to the modern 800-volt electrical system, the South Koreans are promoting the space that is possible due to the architecture at the level of larger classes. This includes “very generous legroom” for both the driver and front passenger as well as for the rear passengers. According to the information, the luggage compartment has a capacity of up to 520 liters, which can be expanded to around 1300 liters by folding down the rear seats. Additional storage space of up to 52 liters, depending on the equipment, can be found at the front under the hood.

According to Kia, the battery of the EV6 can be charged from 10 to 80 percent in 18 minutes at a high-performance public charging station for all model variants with a maximum output of 239 kW. Thanks to its bidirectional charging technology, the EV6 can also be used as a mobile power source. With the help of the “Vehicle-to-Load” function (V2L), an adapter turns the charging connection into a socket that can be used to operate household appliances or charge laptops. The power connection also enables other e-cars to be charged using a charging cable.

Transport Minister: Prices at charging stations must be transparent for everyone

Volkswagen boss Diess: In a few years, electric cars will no longer be more expensive than combustion engines

Audi Q4 e-tron can be ordered in other versions, in future up to a range of 534 kilometers